Kevin & I – Two LGBTQ Youth – One Lost To Suicide – One Confused, Depressed and Closeted For A Decade

Elsewhere in this blog I had recounted this story as if Kevin was only home a few weeks when he committed suicide. After some sleuthing, earlier this year, I uncovered some information about Kevin Blake’s death. There is a news item I found in The Rochester Democrat and Chronicle. In my search I was thrown off by the lack of information about Pioneer Valley Academy or Atlantic Union College (AUC) in this news item as well as the date in the news report. The other facts though check out. The street of his parents home checks out with the address in the Atlantic Union College yearbook for ‘75-‘76. The age would be right as well. Well there are a couple minor inconsistencies, It is not that unusual for relatives to change information after a suicide.

In the fall of 1975 I began my freshman year in college. I attended Atlantic Union College in South Lancaster, Massachusetts which is a Seventh-Day Adventist parochial college. That semester I met this small group of gay students and began to hang out with them. I struck up a close friendship with Kevin a fellow freshman. He was one of the only, blatantly obvious, gay students. In fact his flamboyant mannerisms earned him the nickname Rosebud, (and no this was not referring to a part of the anatomy known in gay slang as rosebud). We spent lots of time talking in the dorm stairwell. He talked about his same-sex sexual experiences at an SDA boarding high school (the now defunct Pioneer Valley Academy). In fact Kevin was the only person I came out to as gay. Kevin was flamboyant and effeminate and so was singled out for taunts, ridicule and threats. He also was well aware that who he was conflicted with the church’s beliefs.

I remember practicing “The Hustle,” a disco dance style popular at the time. Kevin tried to show me the steps in his dorm room with limited success. One Saturday night a group of guys were going into a gay bar in Worcester. They talked me into coming along and I agreed, (rationalizing that this was a sociological study). When I walked in it was like another world. Despite my discomfort I could see many of these guys were like me. I was being cruised and didn’t know what to do so I was grateful when Kevin asked me to dance. While dancing with Kevin I began to feel at ease and even enjoyed myself. On the ride home I was processing all that had happened while trying to keep Kevin’s hands off me.

At some point he lost his virginity, (he was the bottom) and was ecstatic about he experience despite the obvious discomfort. I mention this because this was something that significantly added to the conflicts he had between the very positive emotional reaction to his sexual experiences and the very negative comments about homosexuality and effeminate behavior, (Kevin was very flamboyant), he heard from others and his church.

Eventually the semester ended and many students, including Kevin, went home for the Christmas/New Year/Winter Break. I stayed on at college but did hitchhike to Maine for New Year’s Day with one of the other gay students. As we all came back from break, Kevin did not return. He remained in his parent’s home town of Greece, New York, (near Rochester), where he enrolled at Monroe Community College for the second semester. He then went to work for Kodak. He worked there until he was laid off on Wednesday, December 22nd, 1976.

What happened between September of 1976 and early Christmas morning, 1976 was a real family tragedy. The news eventually reached me and it was horrible; Kevin was dead and so were his father and mother. His mom had committed suicide in September of 1976 when problems “no one knew about overcame her.” The news report completely omitted any reasons for any of the suicides but because I had long conversations with him I am reasonably sure the conflict was, in part or in whole, about Kevin’s homosexuality. He must have become overwhelmed with guilt, depression and confusion not just about his own personal situation but also over his mom’s suicide 3 moths earlier, possibly in reaction, at least partly, to issues surrounding Kevin’s sexuality.

So at 3:30, early on the day before Christmas, he went over to his father’s home. He walked into the garage, closed all doors as his mother had 3 months earlier, left a note on his dad’s car then climbed in and started the car. So with the garage door closed and the car running the Carbon Monoxide take his all too short life (he was 18).The fumes, unfortunately, were not contained in the garage but seeped under the breezeway and doors and through the house to his father’s bedroom. The tragic result was that both Kevin and, accidentally his father were killed by carbon monoxide fumes.

Before this tragedy happened I had another experience which affected me You see early in 1976. I had a brief relationship myself with another of our little gay click, Tony, a student from Bermuda. We shared a mutual bathroom as the dorm was set up to accommodate 4 students between two rooms with a restroom/shower in between. It began with us hitchhiking up to Maine for a New Year’s party up in South Portland, Maine. I went to visit a young woman who was the aunt of some friends of mine from my hometown in Maine. I don’t remember much, in part because on New Year’s Eve I had my first experiences with Vodka in the form of “screwdrivers” and marijuana. I know I was drinking and mimicking everyone as the joint was passed around. By the time we went home I was seriously wasted. I honestly don’t know if any sex occurred but I don’t think so. We got back to the college and one thing led to another and we ended up in, on or beside Tony’s bed. It really was simple, harmless, mutual masturbation but it didn’t seem harmless to me at the time. The church the college was affiliated with, (Seventh-Day Adventist), seriously frowned on individual masturbation and decidedly hostile to homosexuality. At the next break, Tony took off for an adventure up to Toronto where he had some one night stands. A few days after he returned he became ill. The health services diagnosed it as mononucleosis and Tony was sent home. I took this as a warning sign and decided to refrain from sexual encounters but by the end of the year, at which point I learned about Kevin’s suicide. I was an emotional wreck. Kevin’s death added to the personal emotional trauma I was going through. Over time all of this merged, in my mind, as all happening in January of 1976 when in fact the news about Kevin came after Christmas if 1976. The effect all this turmoil had on me was significant. As a result, I remained firmly in the closet until February of 1987.

This has been a lesson on how we can block or misremember traumatic events. If I hadn’t been determined to sleuth out this story, trying to find what the story surrounding Kevins suicide really was. I would still be sure all of these events happened at relatively the same time. In January of 1976, when his death actually happened in December of 1976. There was a discrepancy, (or an omission), of the time Kevin spent in Massachusetts, first at Pioneer Valley Academy and then his semester at Atlantic Union College. I have no idea why this information was withheld but it made finding this new information much more difficult. 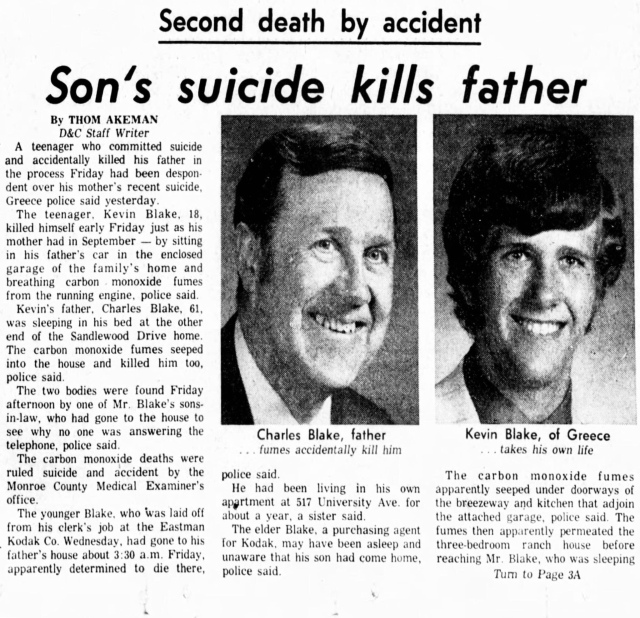 I am a do-it-yourselfer. I have written how-to books on sustainable permaculture gardening, natural home canning, baking sourdough bread and solar cooking.

He became ink in her pen and she never stopped writing.

idle thoughts and more from a girl named Toni

The ramblings of a non-binary Latino.

Positive action for nonbinary rights - currently campaigning for nonbinary gender inclusion on the forms and literature of every organisation which interacts with the public in the UK.

Be a Trans Advocate

At the intersection of LGBTQ+ life...

The greatest WordPress.com site in all the land!

Gay on a Budget
Let's Queer Things Up!

Together we can make the world a more positive one

A Boy and Her Dog

Traversing the Border between Butch and Transgender

Party of One; Meal for Two

The exploits of a single, gay twenty something

The Stretch For Something Beautiful

MAKING SURE YOU ARE INFORMED

The musings of a witchy Welsh showgirl

your silence will not protect you

vulnerable thoughts on mental health, society, and life at large

The Gay Road Less Traveled
Proud to Be Here

be proud where you are, too

Discover our wild world in a whole new way.

Proud Program of CenterLink: The Community of LGBT Centers

A chronicle of fun and fear, or, daily life with my young trans daughter

The human toll of 70+ countries' anti-gay laws. The struggle to repeat them.